This is a new concept for me. Yes, I've written song fics before (read Borderline if you'd like), and I've certainly read a lot of them.

But this is the first time I've tried something like this.

The premise is this:

That is the long and short of it.

So here goes my first one. As you might suspect it's a Canadian artist (eh?), one who I greatly admire (and I really hope she gets her new record deal signed soon) and who I have used in my fics before... 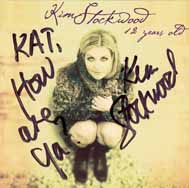 Back to Fics main page

Back to main Kat's Meow page